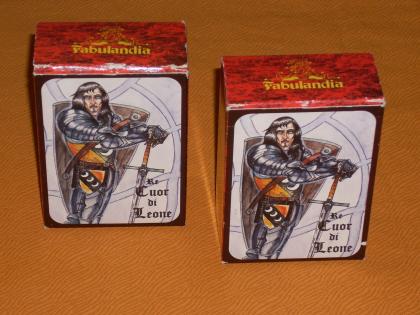 A collectible card game of the early '90s.
Description from rules:
"It 'set in medieval Europe, an era full of myths and legends that we intentionally revisited with historic elements and other purely fantastic. Each player plays the parts of a royal family, consisting of a king, a queen, a prince and a princess.
The goal is to eliminate as many opponents of real characters.
Family members will fall into fights or be victims of one of the many plots hatched in secret at court.
In defense of their King, the Army will cross the territories of the Kingdoms, scene of several battles, and fight to the death, accompanied by terrible Adventurers from the most prestigious "Compagnie di Ventura" (mercenary).
Meanwhile the men of the Court can weave plots in the risky realm enemy, drawing huge sums from the royal treasury.
In addition, powerful spells and tremendous sorcery influence the destiny of each player ... "

Players prepare their own decks of cards dividing that in Kingdom's deck and draw deck.
Each round a player can discover up to 3 cards from the Kingdom, according to the last card face can perform different actions that can be:
- Attack an enemy kingdom;
- Prepare the defenses of his kingdom;
- Increase his royal treasury;
- Weave a plot against an opponent;
After discovering his Kingdom cards , if have the Armies in hand can play it, eventually integrating with the "Compagnie di Ventura" (mercenary) purchased using the treasure.
At the end of the turn draw from the deck to bring their hand to 8 cards.
When one of the decks of a player runs out, the game ends and the player who has managed to eliminate many real charachter won.