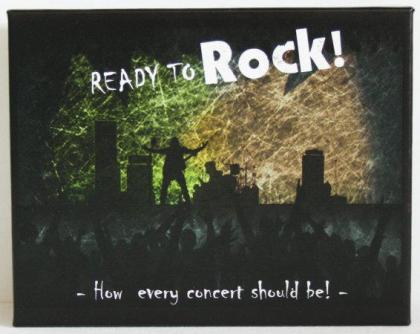 Ready to Rock! is the first party game set at a concert, and everyone wants to be the first rocker who reaches the stage. To maximize the concert feel, pictures taken at real concerts are used on the cards and guitar picks are the player pawns!

While Ready to Rock! is a pure card game, it also uses mechanisms of placement games. The rockers play their route cards, which represent the audience, then they move in different directions through the crowd so that in each match rockers will reach the front row through different paths.

Moreover to advance in every gig, rockers must obstruct other players' progress, perhaps pushing others back by using a special card or blocking their way with a wall card. What creates walls at a concert? Obviously the Mosh Pit, the Hell's Angels, and the Headbangers! A rocker once blocked should not despair as he can always change the direction of the crowd to open up new paths to move in other directions. In addition, Body Surfing might help you pass the obstacle and run toward the stage!

In the game, each rocker starts with four cards and can draw one card each turn. During his turn, he can play at most two cards. Cards are divided in three types: routes and walls – which have already been explained – and instants. The latter are bonuses he can use for himself (e.g., if you get "beer", then you can draw two cards, or with "flashing tits" a player can use three cards in a turn) or against one opponent, such as "ear plug" (which makes him skip a turn), and "smashed beer" (which makes him discard two cards). There are also "Ready to Rock!" card, special cards that activate one of the stage cards to generate unforeseen effects on all rockers: "special guest" forces every rocker to draw one card, while "shitty weather" makes everyone discard one card and "fire explosion" muddles everything up by rotating all the path cards 180º.

Ready to Rock! is a game with a unique real setting and is easy to learn, although some strategy tips are essential to win the game. Given the content of some cards, the game is not suitable for children: for instance, in "lots of beer" there's a guy drinking two beers at once and in "flashing tits" a girl shows her tits to the entire stadium. It's perfect, however, by the age of 14!