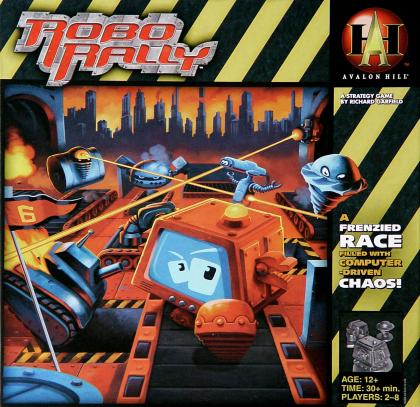 Imagine that you're a supercomputer. Now imagine that you're bored. So you dream up a little contest for you and a couple of your supercomputing buddies. Your task is to move one of the stupid little robots out on the factory floor through a series of checkpoints scattered throughout the factory. The wrinkle, however, is that the factory floor is filled with all kinds of inconvenient (if not down-right deadly) obstacles located in various locations: conveyor belts, crushers, flame-throwers, pushers, teleporters, oil slicks, pits, et cetera. But the real fun comes when the robots cross each other's path, and suddenly your perfect route is something less than that...

In RoboRally players each control a different robot in a race through a dangerous factory floor. Several goals will be placed on the board and you must navigate your robot to them in a specific order. The boards can be combined in several different ways to accommodate different player counts and races can be as long or as short as player's desire.

In general, players will first fill all of their robot's "registers" with facedown movement cards. This happens simultaneously and there is a time element involved. If you don't act fast enough you are forced to place cards randomly to fill the rest. Then, starting with the first register, everyone reveals their card. The card with the highest number moves first. After everyone resolves their movement they reveal the next card and so on. Examples of movement cards may be to turn 90 degrees left or right, move forward 2 spaces, or move backward 1 space though there are a bigger variety than that. You can plan a perfect route, but if another robot runs into you it can push you off course. This can be disastrous since you can't reprogram any cards to fix it!

Robots fire lasers and factory elements resolve after each movement and robots may become damaged. If they take enough damage certain movement cards become fixed and can no longer be changed. If they take more they may be destroyed entirely. The first robot to claim all the goals in the correct order wins, though some may award points and play tournament style.

The game was reprinted by Avalon Hill (Hasbro/WotC) in 2005.