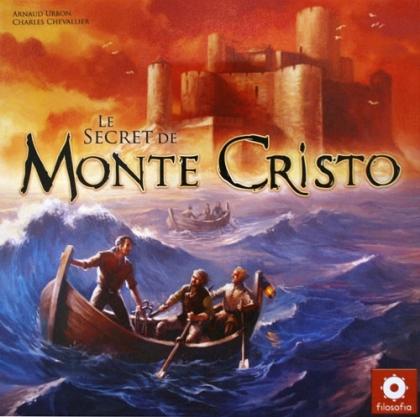 The Secret of Monte Cristo

In the Alexandre Dumas novel The Count of Monte Cristo, the protagonist, Edmond Dantès, is imprisoned in the Chateau d'If for fourteen years, during which time he learns about a fortune hidden on the island of Monte Cristo. Eventually he escapes, boards a smuggling ship, then makes his way to the island, where he manages to recover the fortune.

But did he find all of value on the island? That's not what designers Arnaud Urbon and Charles Chevallier propose in Le Secret de Monte Cristo, coming from Filosofia in French, with eggertspiele and Z-Man Games releasing versions in German and English.

The players are smugglers who learned of the treasure from Dantès while traveling together, and now each of them has decided to search the island for any treasure that might remain. Each round players receive cards that show what type of treasure (gems) might be found in the castle, with the active player that round placing three smugglers in the castle and all other players placing one.

Once new treaure has been distributed in the castle rooms, players then take actions based on the order of the marbles showing in the game's "action slide" – this being a tilted rack with four slots in it, with a different action associated with each slot. The player whose marble is at the bottom of slot one takes that action, then places the marble at the top of any other slot; then the player at the bottom of slot two takes that action; and so forth.

Players can seize treasure from rooms if they outnumber the other smugglers present and they have the right sacks on hand for storing the treasure.

Voti e commenti per The Secret of Monte Cristo