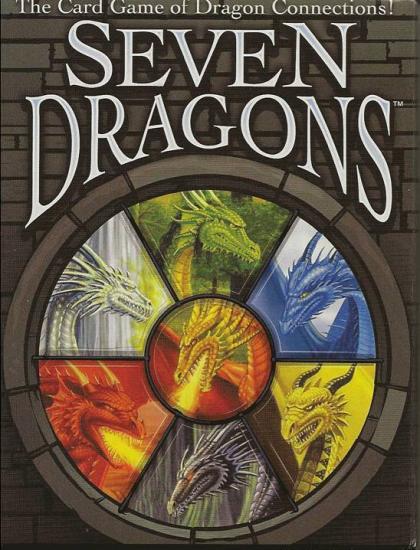 In Seven Dragons, players start with a secret goal color from the seven colored dragons and a hand of three cards. The Silver Dragon is laid on the table as the starting card; at this stage it is a wild card. The playing cards feature domino-like colored panels in the same manner as Aquarius, an earlier game design from Andy Looney.

On a player's turn, she draws one card and plays one from her hand. Cards are laid so as to connect matching colored panels. The deck also includes Action Cards such as Move a Card, Zap a Card, Trade Hands, etc. The used Action Cards form a discard pile, and the top card of this pile dictates the color of the starting Silver Dragon; once the discard pile has started, the Silver Dragon is no longer wild.

The first player to create a connected territory of seven panels matching her dragon color wins.