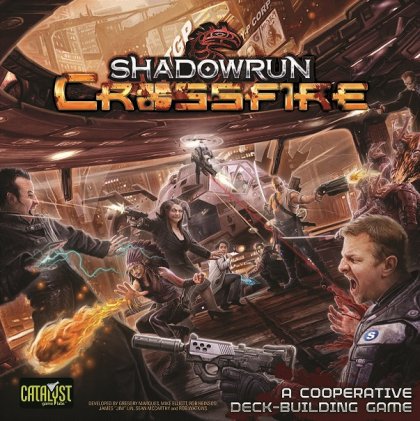 The shadows of the Sixth World have every kind of danger you can imagine: ultra-violent gangers, flesh-eating ghouls, mages that summon spirits from toxic waste, backstabbing corporate raiders, hard-nosed police officers, and even dragons. You don't have&#3; much &mdash; mainly your guts, your wits, and your friends &mdash; but maybe that's &#3;enough. Between you and your teammates, you can sling spells, hack the &#3;Matrix, talk a tiger out of his stripes, and bring down a charging ork &#3;from a hundred yards away. Will that be enough to face down the worst &#3;the mean streets can throw at you? You're about to find out.&#10;&#10;Shadowrun: Crossfire is a cooperative deck-building card game for two to four players set in the gritty, cyberpunk fantasy world of Shadowrun. Play a shadowrunner team and take on tough jobs such as protecting a client who's marked for death, shooting your way out of downtown when a run goes sour, or facing down a dragon. In each game you'll improve your deck with a mix of strategies, while earning Karma to give your character cyber upgrades, physical augmentations, magical initiations, weapons training and Edge.&#10;&#10;Shadowrun: Crossfire includes two obstacle decks, a black market deck, a crossfire event deck, mission sheets, role cards, runner cards, and upgrade stickers.&#10;&#10;