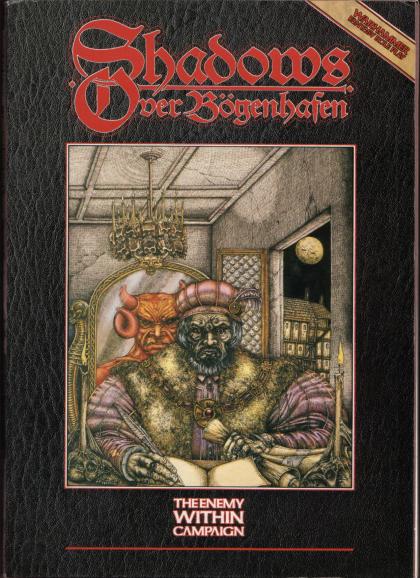 The Enemy Within Campaign Volume 1
From the back cover:
"The Enemy Within: Shadows Over Bogenhafen is the first volume in an epic campaign for Warhammer Fantasy Roleplay. It is the definitive guide to the mighty Empire of the Warhammer Old World, full of background information covering the history, geography, politics and religions of the Empire, as well as invaluable material on starting and running the campaign.
And you can begin straight away with an intriguing and chilling adventure which introduces the players to the Empire, sets them on a hunt to seek out and destroy the heart of a demonic conspiracy, and brings them face to face with the corruption threatening the very foundations of their world. This volume combines material originally published separately as The Enemy Within and Shadows Over Bogenhafen, now revised into a clearer, easier to use format."