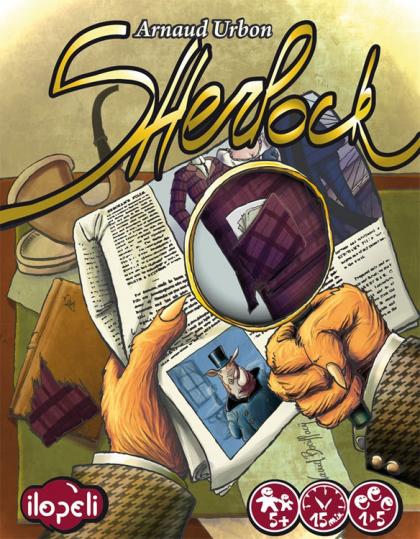 Sherlock is a cooperative memory game in which players try to unmask the culprit by collecting cards that exonerate the remaining suspects.

To set up the game, thirty cards are shuffled and placed face-down in a 6x5 grid. Each card shows one of six witnesses on its back and a witness viewing one of the five suspects on its front. On a turn, the active player reveals two cards in the grid. If they match, the player then turns over a third card. If all three cards show show the same suspect, the cards are collected and placed face-up next to the grid. In all other cases, that player turns the cards face-down once again, then flips over one of the ten timing cards, each showing Sherlock's nemesis Moriarty.

If all ten Moriarty cards are flipped, then the players lose the game. If, however, the players remove cards from the grid until only three remain, they have successfully identified the culprit – that is, the suspect who remains – and can claim victory.

A competitive variant is included in the rules which have players competing to collect witness cards. An additional variant rewards points to the player who holds (or doesn't hold) the suspect eventually identified as the culprit.