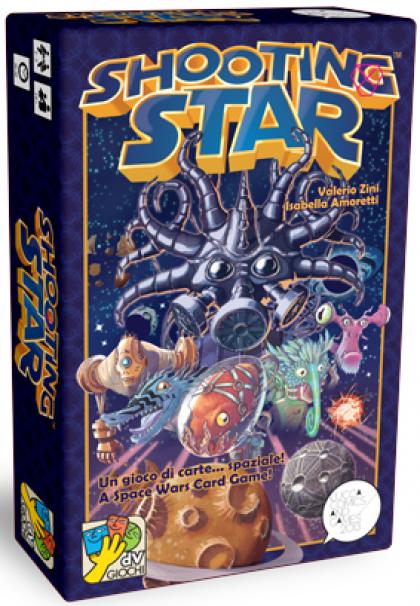 This game has been published by dV Giochi as a reward for winning the 2012/2013 edition of the Gioco Inedito – Best Unpublished game contest. Powered by Lucca comics & Games and dV Giochi, the contest aims to identify the best new card game design from all prototypes received and to reward it by publishing the game in a fully professional and high-quality format, overseen directly by dV Giochi. All prototypes submitted must conform to the technical and style requirements, fixed components and a given theme which changes every year. Everybody can join the contest and this is a great opportunity for emerging game designers to see their idea published.
For more information:
giocoinedito@luccacomicsandgames.com
www.luccacomicsandgames.com

The card game Shooting Star is set in a distant galaxy, where ruthless Space Admirals compete to earn the respect of their commander – the Dark Invader himself – by destroying everything that comes into range: starships, meteors, planets...
Do you have what it takes to rise up the ranks and take command of the Dark Invader’s Fleet?
Your goal is to score more points than the others by destroying Planets, capturing Moons, destroying your opponents’ Destruction cards, and completing your own Secret Missions.

It's as easy as 1-2-3:
1. Secretly position your weapons on a planet (by playing your card face down).
2. Reveal your weapon and blast the other planets (by turning your card over).
3. Blast a planet enough and your can capture it! Earn even more points by capturing moons and completing your Secret Mission!