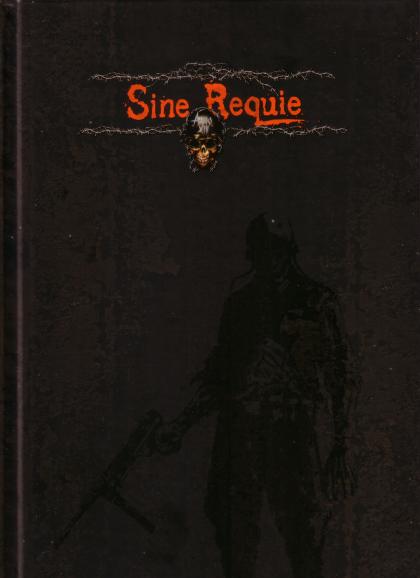 From the back of the book:
On June 6, 1944, the world sank in the darkest of hells. On Doomsday the Dead started their hunt against the human specie.
Now it's 1957, the world is a pile of rubble, where the few survivors try to resist to the hunger of the Dead. A few nations, ruled by cruel dictatorship, have survived.
In Germany raised the IV Reich, a reign of horror and madness, of cold genetic experiments aimed to the creation of the chosen race and terrifying weapons.
The great Russia is buried under the titanic Soviet's cities of steel, ruled by the inhuman calculator named Z.A.R. and his bio-machines.
Italy, renamed Sanctum Imperium, is ruled by Pope Leone XIV and his Inquisitors. In those anachronistically lands stakes are returned to burn human flesh.
The darkest future humanity could imagine has become the most hideous of reality. This is the world of Sine Requie.
Face your destiny in this roleplaying horror, crude and realistic.
Explore the world of SINE REQUIE ANNO XIII with an innovative game system based on interpretation, using Minor Arcana and Tarots.
In this book you'll find the setting and all the rules necessary to adventure in the world of SINE REQUIE ANNO XIII.