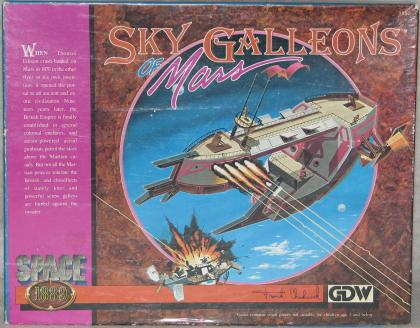 Sky Galleons of Mars is a board game set in the fantasy Victorian era of space exploration. It is essentially the tactical ship combat game for the "Space: 1889" role-playing system.

The game has a lot of mechanics that are similar to Star Fleet Battles and Interceptor. It has a distinct 'naval' feel about it though... think of a game like Wooden Ships & Iron Men, with altitude thrown into the mix.

The game is played in turns of three phases. In the Initiative Phase, players form or disband boarding parties and change crew assignments. They also roll dice to see who becomes the First Player that turn.

Two Movement/Fire Phases follow. The moving player moves all of his vessels, both players fire (depending on range, weapon, etc.), damage is taken, then the second player repeats the full move/fire action.