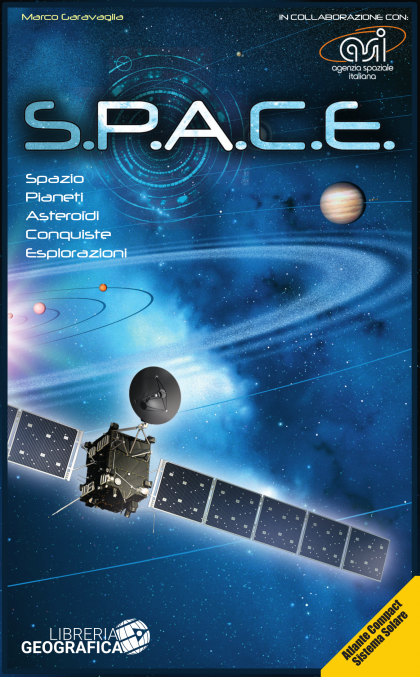 S.P.A.C.E. (Space, Planets, Asteroids, Conquer, Explore) is a game about the exporation of the Solar System.&#10;It has some didactic contents (such as planetary features, rudiments about the probes etc.) but it's a &quot;real&quot; game in every aspect.&#10;In each round, a player must choose one of these actions:&#10;a: scientific research (i.e. draw 2 cards)&#10;b: build a part of the probe by spending cards&#10;c: start a mission toward a planet, once the probe is complete&#10;d: play a mission card&#10;e: play an ALERT card (normally against other players)&#10;f: send an already built part of probe to supply the ISS station.&#10;&#10;Each time a player explores a planet, they can choose the Discovery side of the planet card (full amount of Victory Points) or the Technology side (less points, but they'll gain a special power for the rest of the game. Each planet has a different one).&#10;&#10;It's also possible to explore asteroids through mission cards.&#10;&#10;The game ends when 3 planets have been totally explored (i.e. when 3 planet decks are finished) or when all the asteroids have been explored.&#10;&#10;At the end of the game, the players will score points according to the explored planets, explored asteroids and contributions to the ISS station.&#10;&#10;In the box there is also an atlas with infos about the Solar System.&#10;&#10;