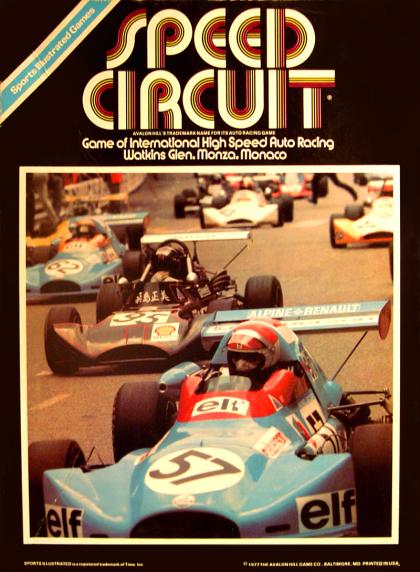 In Speed Circuit, each player takes control of a Formula 1 racecar zipping around the tracks. Each person then distributes a number of points to Start Speed, Top Speed, Wear and other attributes, five points per lap. Then, each player moves based on their speed, and can adjust their speed, choosing to forfeit a Wear Point, or roll the Chance Die, where a bad roll could cause you to move through, spin out, or even crash out of the race. Whoever gets over the line first wins.

Before the race begins the players prepare their cars by allocating points, so if you want faster acceleration or speed you have to sacrifice start speed or braking or tire wear.

Each turn, the players write their planned speed for the next turn and then move their cars 1 space per 20 mph. Each curve on the track has a speed limit that cannot be exceeded without penalty. If you exceed curve speed, overaccelerate or overdecelerate your car, etc., you pay penalties in tire wear or possible damage to your car or elimination from the race.