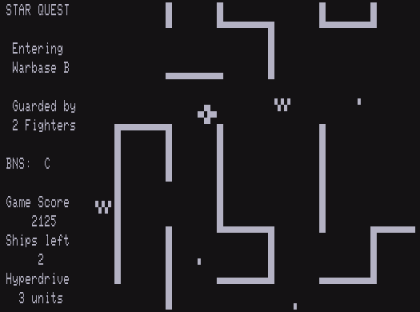 This TRS-80 action game requires you to pilot your spaceship through a series of maze-like enemy Warbases, destroying the aliens guarding each base. Each Warbase is protected by a variety of different aliens with varying powers and attacks. Your alien foes include chasers, fighters, annihilators, and vexers.

Each level of the game (a new Warbase) consists of a single screen of irregular walls. Your ship cannot move through the walls or off the edges of the screen. Enemy ships enter from the sides of the screen and attack your ship. Your ship features a hyperdrive that can be used to instantly move to a random location on the screen (similar to the hyperspace button in Asteroids), but you can only use this feature a limited number of times on each level.

You must destroy a set number of enemies in a Warbase before the translocator will appear and move around the screen. When you move your ship onto the translocator you are immediately warped to the next Warbase. The object is to score as many points as possible before you run out of ships.