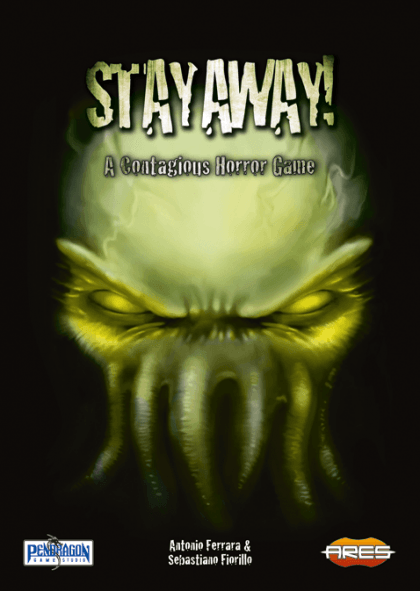 A group of archeologists has mysteriously disappeared during an expedition to the risen island of R'lyeh. You are a member of a rescue team sent to aid them, but as you investigate the site, you encounter something terrible that seeks to destroy your team from within... You'll need intuition, nerves of steel, and clever acting if you're going to survive and win the game. Who will believe you? Who is whom, and who is what? You can't trust anyone and no one will trust you, so block the doors, quarantine a suspect, reveal your identity to your "allies", grab a flamethrower, or run away — but look carefully where you will end up because "The Thing" might be closer than you think... In Stay Away!, 4-12 players try to track down "The Thing", a creature â¨awakened from a nauseating eternal slumber on the emerged R'lyeh island that has the capability of possessing the human body, cloning it, then taking its place, so as you play you won't know who "The Thing" is or when someone will become "The Thing" or who is infected or not. The archaeologists are looking for The Thing; their goal is to work together to identify which player is The Thing and roast it with a "Flamethrower" card. You remain Human until The Thing passes an "Infected!" card to you during a card exchange, at which point you become an Infected and take on that new Role: You are now an ally of The Thing and must take care that its identity is not revealed.

Voti e commenti per Stay Away!