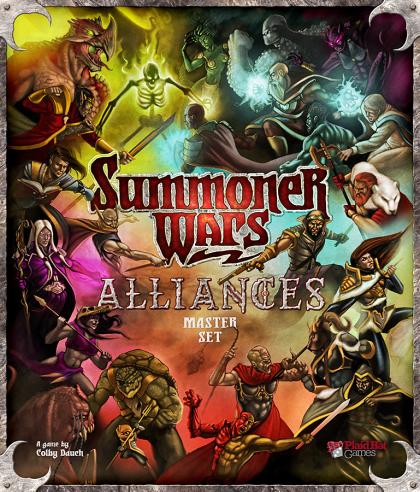 Summoner Wars is a fast-playing, action-packed 2-4 player card game. Players take on the role of Summoners: powerful beings who harness the power of mysterious Summoning Stones to lead their race to conquest on the war-torn planet of Itharia. These Summoners wield terrible magic on the battlefield, freezing their foes in place, draining their enemies of power, and even bringing rains of fire down from the heavens. But most notoriously, they summon their great race's hordes of warriors to the battlefield, to clash in the never-ending struggle for supremacy.

Summoner Wars: Alliances Master Set, a big box starter set for Summoner Wars akin to the Summoner Wars Master Set, features eight complete faction decks and can be played on its own or combined with other Summoner Wars products. All sixteen factions in the SW world are represented as each new summoner is a hybrid of two existing factions, blending the themes of the two factions and expanding deck-building possibilities. The factions are: