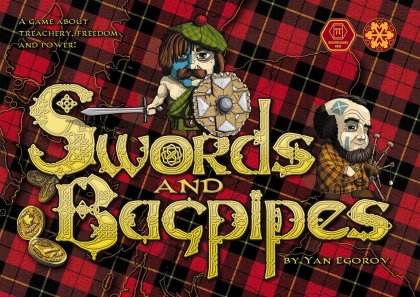 Swords and Bagpipes tells a story about the confrontation between England and Scotland. It is the First War of Scottish Independence. The victory is possible only if all clans unite!&#10;&#10;But Scottish aristocrats often prefer personal enrichment to fighting for freedom. At the same time, King Edward I of England, nicknamed Hammer of the Scotts, pays generously to those who join his side!&#10;&#10;Each round, English army invades the lands of Scotland. Players take on the roles of Scottish clan leaders. They hire troops and send them to battle. Then each rival secretly decides which side he will support: England or Scotland. The Choice tokens are flipped simultaneously. Each side sums up their strengths (the traitors join the English army). Then the winning side of the battle is proclaimed.&#10;&#10;Swords and Bagpipes is based on the famous Prisoner&#226;&#128;&#153;s Dilemma. As a rule, treachery brings more gold. At the end, the richest player wins the game! However, if England conquers Scotland, the winner is not the richest player, but the player who had betrayed fewer times. Since Scotland can be defeated but not broken, its clans will need to rally around the most loyal clan!&#10;&#10;Remember the movie Braveheart with Mel Gibson? Freedom-loving patriots, corrupt aristocrats, and the cruelty of the English king. It's all there in the game, and it&rsquo;s what its participants will experience!&#10;&#10;