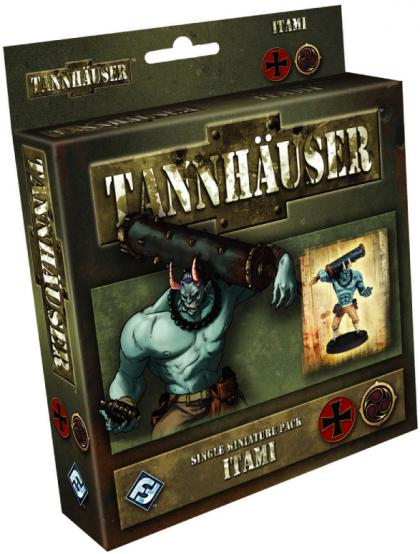 The Russian soldati quaked as the hulking blue figure approached. One panicked, dropping his rifle, and fled. He was the lucky man, the only survivor. The remaining Russians expected the giant to fight like a brute, especially after their bullets bounced off him with no effect, but instead of running at the men, he stopped short and glared with such unearthly ferocity, he bent the commander's mind.

Drawn forth from Naraka by a blend of science and mysticism, Itami is a hybrid of human and Oni, the denizens of the Realm of Suffering. While even the Shōgunate do not fully understand his abilities, they are astounding. His gaze can wrack others with pain and bend their very will. An unholy penumbra seeps out his every pore and drains the essences of those around him.

For now, Itami works to ensure the mutual benefits of the Shōgunate and the Inferior Worlds, swatting aside enemies with a kenabō wrapped in mystically imbued leather. The Shōgunate have placed him in Iroh Minamoto's 3rd Division to best make use of his abilities while they explore their tenuous alliance with the Reich.

Itami includes new rules for the Nippon Accord and a unique scenario that highlights Itami's mysterious powers.