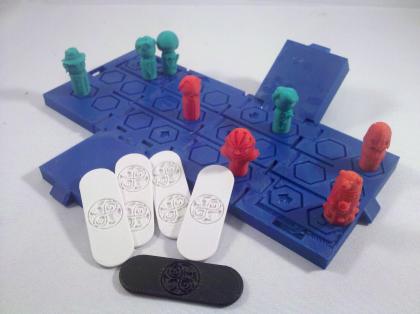 TARDIS Run is a 3D printed, Print 'n Play, two-player game as inspired by Backgammon, Parcheesi and Senet, a game played by the Ancient Egyptians. This game turns the standard "roll and move" upside down by making you choose which character to move before you throw the paddles and add them up to move the piece you've chosen. But the very uneven distribution of the paddles means you can rely on the pieces probably moving 3 spaces. However, when the black scroll of Rassilon is found (by rolling all blanks) with it's 2x multiplier on one side the statistics become considerably harder to predict.

The board for this game is designed to fold into a neat carrying case that holds everything necessary to play inside.