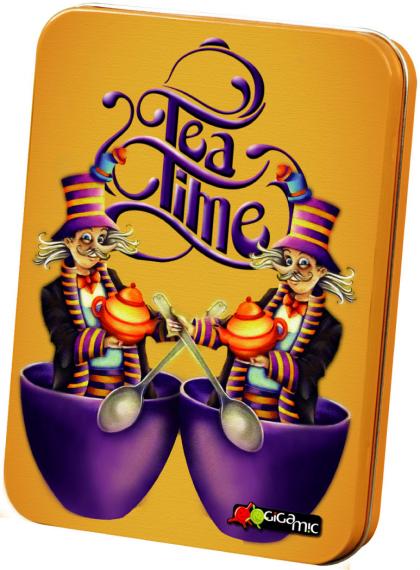 Who will you invite to tea? Be careful who you invite as sometimes the characters will disappear as soon as they arrive!

In Tea Time, players collect characters from Lewis Carroll's Alice in Wonderland, and each character card (other than Alice) is double-sided, with a normal image on one side and a reverse "mirrored" image on the other. Each round, an array of characters is laid out, with normal and mirrored images alternating. The round's start player takes one character, adds it to his collection, then places the Alice card in that spot of the array. The next player takes 1-2 cards, but if he takes two, the cards must be adjacent. From the third player on, each player takes 1-3 cards; again, you can take multiple cards only if they're adjacent. If you ever have a normal and a mirrored image of the same character in your collection, *poof* they both disappear.

After five rounds (with two players) or three rounds (with 3-4 players), the game ends. Players score 1-15 points for collecting 1-5 cards of the same character – with zero cards of a character being worth five points, so sometimes you do want them to vanish! Alice herself is worth four points, and whoever has the most points wins.