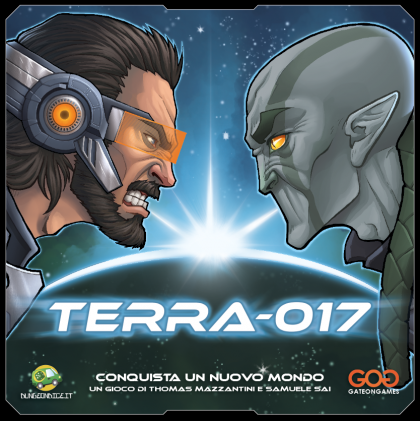 The remnants of the human race are traveling from planet to planet, searching for food and resources. As one of the Faction Leaders, you'll guide your people to colonize Earth-017. Manage your resources, employ your workers, exploit what the planet has to offer to the fullest in this hexagon game of sci-fi civilization. But remember: the planet is far from deserted!&#10;&#10;Terra-017 is a strategic game of hexagon placement, that will let you build colonies on a planet while repelling the alien resistance. Since the first moments you'll realize that the game recalls classics like StarCraft and that it will let you see your colonies grow and develop before your eyes, all illustrated by the excellent art of Valeria Rossi. It's a game in which the ability to plan long term and to react to unexpected player moves or events have equal weight. The hexes represent various buildings you can build and there is a limited number of them, so you'll have to choose an effective strategy to take hold of them and at the same time work towards the objectives that will net you points at the end of each of the three in-game years. Some hexes will give you resources to build, while others will have special abilities, usually activated with your workers. There is going to be a constant struggle with the other players to build the best colony, but pay attention to the annual alien attack, that could do some serious damage to your colonies if you don't prepare in time!&#10;Each year is also divided in the four seasons, each with its own deck of events that will influence the game, forcing you to adapt. Knowing when to build, recruiting new workers or activating special abilities is the key to success.&#10;&#10;