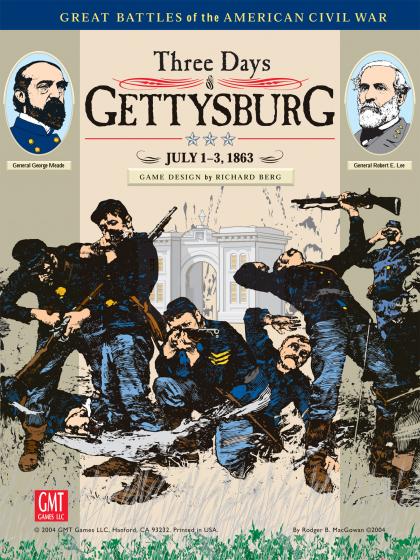 This third printing of the award-winning initial game in GMT's GBACW series offers upgraded components and information throughout. If you own the original 1995 edition of Three Days of Gettysburg, or if you have the upgrade kit, you can continue playing those versions with no problems; those versions still stand the test of time quite well. In this Special 2004 Edition of Three Days of Gettysburg, we've done our best to improve and enhance the components and rules to this already classic game.

The six countersheets contain all of the original and replacement counters from the first two versions of the game, as well as some new counters and units with modified unit strengths and morale levels based on recent research. Rodger MacGowan and Mark Simonitch have revised and upgraded the original counter graphics, and these counters are printed on the higher-quality stock you've come to expect from us in recent years.

Mark Simonitch has completely reworked the three game maps. He's used the original work and maps from Rick Barber and Joe Youst's first two versions as a base, and come up with another of his clean and elegant looks that makes these maps both nice to look at and easy to play on.

The GBACW 4.4 rules that appeared in Gringo! were a major step up for the series in terms of both rules streamlining and presentation. We have further edited those rules and released version 4.5 for this new edition of Three Days of Gettysburg.

Mark has streamlined and done new layouts on the game charts to give players the best mix yet of readability and utility in the least possible table space. We've also included some neat charts created by Mike Lemick that allow you to easily keep track of the status of each side's command and routed unit status..

As you'll note from the graphic above, Rodger has created a whole new game box for this new edition of the game. We think it's some of his best work ever, and hope you agree. The game box is the crowning piece of what is, for a Reprint Edition, about as close to a brand new game, component-wise, as we could get (which is why there is no Update Kit for this version - it would essentially be a whole new game).

So, if your original copy is showing some wear and tear, or if you want an edition of this classic game in which the updated graphics and systems outshine the original (and that is saying a lot), or you simply missed purchasing the first edition of this best-selling game, then this Special 2004 Edition is for you! Enjoy!

A revised Command System, using Maximum Effectiveness to portray the strengths and vicissitudes of battlefield command.
Seven scenarios, from microcosm 1-mappers to the full 3-day battle.
Brigadiers rated with Action Profiles so that, when on their own, you may never know exactly what they'll do! Will an aggressive Dick Garnett recklessly charge everyone in sight, seeking to regain lost honor? Will a cautious Stannard sit and watch? Or will an unreliable Iverson hit the bottle instead of the front line?
Artillery Barrage, simplified Ammo rules, special rules for green units, and an optional Fatigue Rule that really places an emphasis on careful unit usage.
A remarkably simple Shock Table that features Continuous Attack: you can roll up the enemy's flank in one massive charge.

The third edition, otherwise known as the "2004 edition" of this very popular tactical level simulation of the battle of Gettysburg. The game spawned the "Great Battles of the American Civil War" series and is a direct descendant of the old SPI favorite, Terrible Swift Sword.

Components include three newly revised and beautiful maps by Mark Simonitch and Joe Youst (building on older work by Rick Barber and Joe Youst), 1680 counters including units and markers, some new charts, and ver. 4.5 of the GBACW rules.

This edition attempts to bring a simplification to the complicated LOS procedures of the previous editions. The counters have also been cleaned up and overall this edition has quite a bit of visual appeal. This game is very complex but is a great simulation of ACW tactics. However, the game also works with a slimmed down version of the GBACW system rules called "Simple Great Battles of the ACW," the release of which coincided with the publishing of the game. SGBACW brings the series to players who are do not have the inclination or time to master the relatively formidable GBACW ruleset.