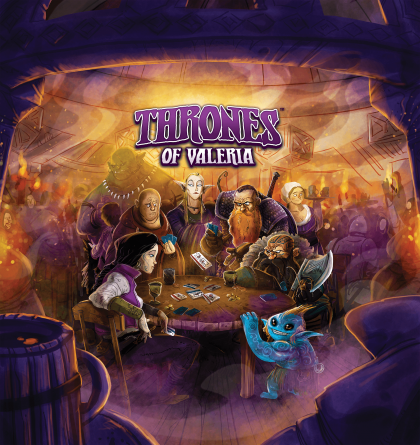 Thrones of Valeria is a trick-taking and rank manipulation game designed by Matt Jacobs.&#10;&#10;Long ago, when Valeria was a fledgeling realm, the five great houses were constantly bickering, stealing, conspiring, and even assassinating each other for the chance to become the wealthiest and most powerful house, allowing one to rise to the throne of the land&hellip;temporarily. The game that evolved from their power struggles has thrived among the common people looking for a taste of the antics of the nobility and is now the sort of game travelers play in taverns, for fun and money.&#10;&#10;Thrones of Valeria reflects the tug-of-war between the great houses in the earliest days of the Kingdom. When printed, the game will be presented as a traditional card game with a deck made up of five suits of cards numbered 1 to 9, plus three special Jesters. The game will also feature a Standings Board and chunky &quot;&quot;mahjong-style&quot;&quot; House tiles to reflect the relative power of each house throughout the game. A draw bag for the House tiles and an assortment of coins will also be included.&#10;&#10;&mdash;description from the publisher&#10;&#10;