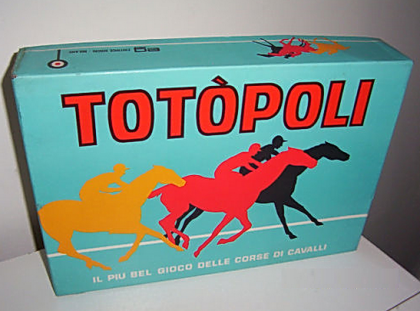 This Italian version of the original Totopoly, was first published in Italy in the '70s and after a restyling it came back in 1996. It shares a very close build up and look with its ancestor, but it also bears some custom traits which give it an "Italian" taste.
First off, the horses's names are unmistakably Italian: Nearco, Niccolò Dell'Arca, Orsenigo, Astolfina...
I wouldn't put my hand across a flame saying that they're all real names, but undoubtedly some of them are.
The gameboard is double sided (in the '70s version instead you had to change the board simply folding a flap page over it) with the training course on one side and the racing track on the other.
The game is played in two distinct phases: training and race.
During the training phase all the players bid to get the fastest horses, usually the black or red ones, and occupations which can give them more money to bet before the race.
Then starts the training. Every horse, starting from no.1 to no.12, gets out from its stables (San Siro at Milan or Capannelle at Rome) and rolling two dice it runs one full lap, before re-entering its own stable.
During this lap the players collect Advantage colored chits (to be used as bonus during the race) or Disadvantage white chits (to be spent during the race as penalties), and pay various taxes for the maintenance, health and fitness of their horses.
To be said, a good training isn't enough to grant you have a winner, because the subsequent race phase bears a great share of randomness.
Totopoli is not only a racing game, but a betting one also, so this is perfectly normal.
Luck and tactics here join together while you're searching for the best lane in every situation, but along the track some dangers are lurking to slow or either exit your horse from the race.
You can win the game as being the winner at the race, or you can win through your money.
And you can play dirty to ease the way for the horse you bet on.
The box includes a double sided board, 12 plastic horses, 78 cards, Advantage and Disadvantage chits, bet bills and two dice.

MITICO GIOCO. A ME PIACE TANTISSIMO