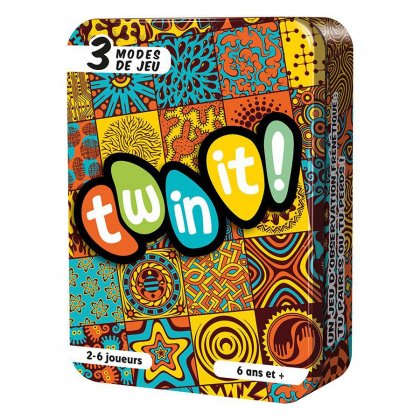 Twin It! challenges you to spot pairs of cards on the table as quickly as you can. To set up the main game, shuffle the double-sided cards, then give each player a similarly-sized stack. Players take turns revealing cards and placing them on the table, leaving all cards visible. As soon as someone spots matching cards, they place a finger on each card, then claim the pair, leaving them in a stack beside themselves. If another card of this type appears, anyone who fingers the twins claims all of those cards! Be the first to claim five twins to win.&#10;&#10;You can also play Twin It!as a team game. When you spot twins, you place your finger on one of the cards and hope your teammate can finger the other before an opponent does, or else the opponent claims the twins instead of you!&#10;&#10;Twin It! can also be played with the cards being held in hand facing away (and toward) each player.&#10;&#10;