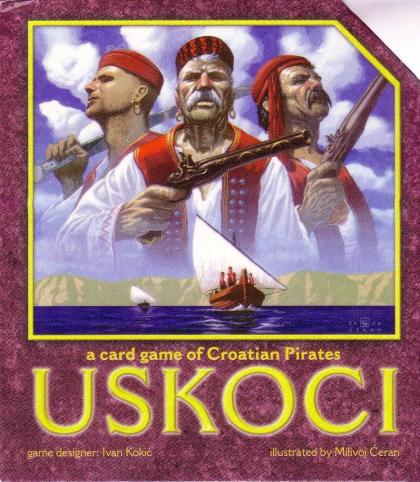 It is the year of our Lord 1603. The Uskok Warlord Radoslav died during the last Venetian raid. All the Uskok leaders, including you, were invited to Nehaj, the unconquerable Uskok fortress, in order to choose their next Warlord.

Dark storm clouds loomed over the stone fortress, its walls battered by the bitter nothern gales, and yet the Uskok leaders could not come to an agreement. Mighty warriors though they were, none of them had proved to be enough to their comrades, so no Warlord had been chosen. As midnight struck, the debate was cut short by a shot from a flintlock. The hall went silent. The old sea dog Stipe spoke: "According to ancient customs, if no agreement is reached by midnight, the title of Warlord shall go to the first lord who collects enough loot to fill twenty-five Uskok vessels." So it was written, and so it was done.

Uskoci were a historical pirate band in the 16th century who lived and prospered by being a nuisance for much more powerful opponents, but never on such a scale to provoke full-scale retaliation. Uskoci: The card game of Croatian pirates takes that idea of heart as players need to demonstrate both their skill as a pirate and restraint comparable to the historical Uskoci to prove the best captain among your peers.

In the basic game, players must combine treasures (valued 1-9) on their pile until they total exactly 25; what makes this difficult are the 14 event cards (Venetians, traitors, storms) that can mess with a player's plans or change the value of a treasure, but thankfully they can also protect you. The more complex game adds card drafting to the mix, with the player who has the least treasure on the table drafting the most cards.

The rules in both games are for 3-6 players, with modifications that allow two players to go head-to-head.