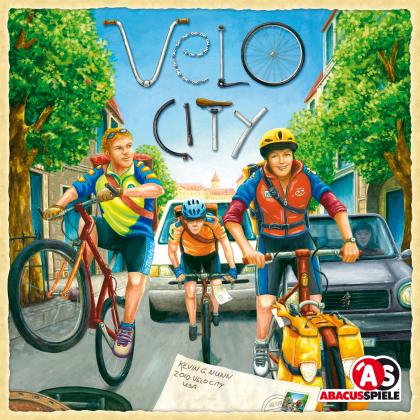 A tactical dice game. Each player manages a team of bicycle messengers and tries to get as many of his own riders as possible to the goal.

When rolling a die to move one of your messengers you can land on three different types of fields on the board:
- most fields have no special effect
- some give an energy boost (a vitamin drink)
- some are obstacles which require you to use a vitamin drink, or slow you down.

Vitamin drinks can be played for other benefits in the game.

Instead of selecting a single messenger, one can also roll multiple dice for an entire group of riders. This allows a player to choose the most beneficial result, but in turn means that opponents' riders will also move.

The game ends as soon as all 3 messengers on a team reach the goal or eight total messengers have reached the goal. The team that has the most messengers at the goal wins. In the case of a tie, the player whose messenger crossed last wins. This is important, since during the end phase players may hold back messengers to avoid reaching the goal too soon.