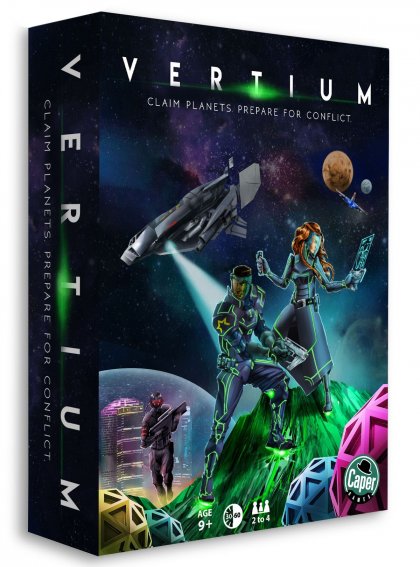 Vertium: Shadows of the Complex

Soar Space Force&#10;Captain John Brooks: Log 2373-9&#10;&#10;The Complex crushed all opposition on Earth, the Moon, and Mars, and banished the remaining rebel factions to Pluto and Charon. We established our makeshift colony on Charon and explored the region. We discovered the Royal Martian Federation (RMF), the Hielo, and the Myst; and made contact.&#10;&#10;Although historical rivals, we worked together to survive the frigid conditions, stockpiling resources and launching probes across the Milky Way.&#10;&#10;One probe returned compelling data from the Copernicus System in Quadrant 1. Coper has a yellow dwarf star and an intriguing group of planets. A dazzling radioactive element, that we named Vertium, was discovered. Our physicists think it could heat our colonies, and upgrade weapons and armour.&#10;&#10;As word spread, the rebel groups bolted for Coper. The fragile cooperation evaporated. Each faction is now out for itself - claiming planets and mining Vertium. The stakes are clear: for whoever controls the Vertium will control Coper and perhaps the galaxy.&#10;&#10;Brooks out.&#10;&#10;CLAIM PLANETS. PREPARE FOR CONFLICT.&#10;&#10;Each faction selects a Secret Objective card before the game starts. If the faction has claimed that planet, they receive 3 extra VP at the end of Phase 1. The 3 Victory Points will result in 3 additional Vertium.&#10;&#10;Players work through a deck of cards looking for a set of resources to colonize a planet. There are 4 resources: Water, Agri, Metal and Energy. A planet must have one of each to be colonized. But which planet will you target as they have different values (some of which are revealed before the game starts)? The spheres with a lower value have fast-moving moons and could yield more Vertium than planets with a higher value but slower moons. And do you really want to gamble on a planet with an orbiting blue moon, and risk a devastating Winter Eclipse? As Commander of your faction, you must take all possibilities into consideration, and direct your Captains to the optimal planets.&#10;&#10;When a player lays down a set of 3 resource cards, she places the corresponding Colonization Token on a planet of her choice. As each turn progresses, the tension builds, because whoever adds the fourth resource is the faction who claims the sphere. And if you think the other rebels are going to just let you have your way, think again.&#10;&#10;You'll also have to make contingency plans should you encounter disaster: a water leak, an agri virus, a mine blast, or a nuclear meltdown. And watch out for those pesky raiders!&#10;&#10;When a planet is colonized, its orange moon reveals the value of the planet. Place a Captain and the corresponding amount of Vertium on the sphere. Orbiting moons will add additional V each month. When all planets have been colonized, the true nature of the three blue moons is revealed. The game now ends for those who don't wish to battle. Victory Points are awarded for claimed planets and total amount of Vertium. The faction with the most VP is the winner.&#10;&#10;For those who want to battle, the last phase of the game begins, with the leader in points targeting a rival planet and attacking (sending a Captain with a provision of Vertium into the skirmish). Battles are decided with the Skirmish Cards &amp; Dice System. The cards are able to change some dice rolls (elevating decisions over pure luck).&#10;&#10;The Battle phase lasts for 3 rounds, with each faction getting an equal amount of turns. The faction with the most VP &#10;at the end of round 3 is the winner. Victory Point: 1 point each per VERTIUM and 2 points per owned planet.&#10;&#10;&#10; There are also 2 expansions and SOLO rules. ** &#10; &#10;&#10;&#10;