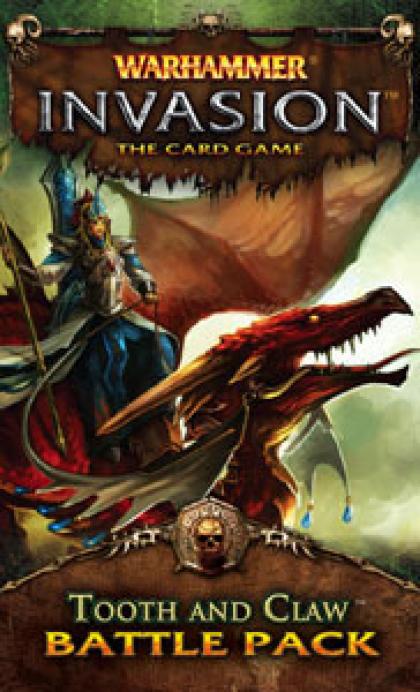 The first battle pack, The Skavenblight Threat, saw the emergence of the diseased and squabbling Skaven. The second battle pack, The Path of the Zealot, brought new forces for the Skaven and the witch hunters. Now, new heroes are rising to do battle with the growing rat menace.

The might of Gurni Thorgrimson and Ugrok Beardburna explode on the scene. Gurni gets more deadly with each attachment he is given. Ugrok takes the berserk ability to a new level, gaining a point of power for each damage on him. Empire Reiksguard Swordsmen are a powerful ally with their Counterstrike capabilities, and Dark Elf Cold One Chariots get bigger with each development put into play. Chaos and High Elves each gain new units to lay waste to their foes.

The Skaven will not give up the gains they have acquired and are bringing to bear the power and ferocity of the Rat Ogres and Gutter Runners. Rat Ogres can allow you to get more out of your Skaven units, and the terrifying Clan Moulder Elite Rat Ogres are solid walls of muscle that can overwhelm many a foe.

Empires rise and fall, and they require development and support if they are to last. The Scout Camp can provide you new options, and the Anvil of Doom assists the forces of Order by improving the quality of their weapons and armour. Each side will be forced to employ new tactics in an ever-shifting tide of battle and kingdom-building. Mob Up lets the Orcs see the fruits of their fighting, without that annoying Order ability to cancel damage getting in the way. Grasping Darkness gives the Dark Elves control of a unit with low power, if but for an instant. Lastly, Reap What’s Sown gives vast power to those who build up their lands.

War has arrived. Blood has been shed. Many lives on both sides have been lost. New power is coming. Are you strong enough to finish the fight?