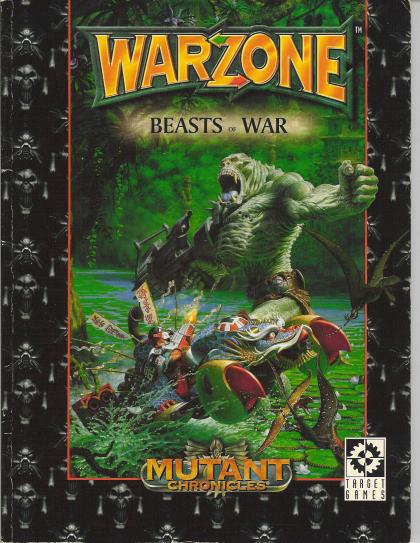 GLORY TO THE BRAVE!

"The roar of the Necromower's twin diesels was deafening as it cruised the desert landscape in search of prey. Within moments, its Wolfbane driver spotted a familiar yet horrifying outline against the horizon - a pair of Pretorian Stalkers leading an assault group of Legionnaires, Necromutants and Centurions. Without a second of doubt, the driver turned his beast of war to face the new threat..."

WARZONE COMPENDIUM 2 is the second official supplement for WARZONE - the dast and furious techno-fantasy miniatures game. Included are:
- VEHICLE RULES for use in your Warzone game. Have your Capitolian Purple Sharks strafe the Dark Legion scum in the venusian jungles, or your Necromower squads cut blody swathes of destruction through ranks of Legionnaires in the martian deserts. Beast of War includes full stats and descriptions of ten vehicles, including the Mishimese Dragonbike, the TA6500, the Imperial Necromower and Twin Barracudas, and the Brotherhood Death Angel.
The vehicle rules have been designed specifically to capture the fast and furious atmosphere of Warzone, and works in small skirmishes and large all out battles alike.
- NEW TROOPS, including large sections of the Secret Kohorts - the heretic forces of Algeroth - and the Imperial Clans' numerous special forces.
- RULES UPDATES, clarifications and additions.
- VEHICLE REFERENCE CARDS and a new template.
- NEW WEAPONS for use with or without vehicles.

Get ready to enter your Beasts of War!