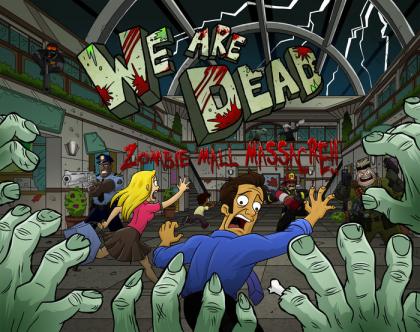 We Are Dead: Zombie Mall Massacre

We Are Dead: Zombie Mall Massacre! The board game where you and your friends take on the role of the shambling zombie horde. Your goal is simple: turn as many mall shoppers as you can into zombies. Achieving your goal is not simple. Human Heroes attempt to put you down permanently and the roaming horde of your victims is trying to eat up your food supply.

Art for the game was done by two amazing artists, Mike Morris and Mike Collins. I cannot rave enough about how well they brought the vision for this game to life (or unlife).

Players take turns attempting to attack the mall shoppers trying to satisfy their recently unlocked hunger for humans. Players will use attack cards from their hands and infection tokens they receive to defeat heroes and turn the humans.

While players are busy with their own struggles, the horde grows from their victims. When the Horde! card appears the players must work together to make sure they do not all lose to the massive horde.

We Are Dead is easy to learn, but provides enough depth and random elements to allow for good replay-ability. The game uses a hand management mechanic with elements of co-op play and resource management that add layers of strategy to the game.