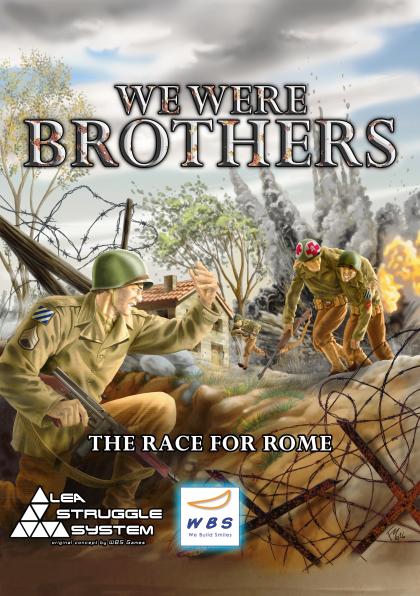 We Were Brothers is the ultimate WWII infantry warfare board game and the first cross-over wargame. The game covers thirty historical missions for U.S., Wehrmacht, British and Italian armies from the three landings theaters in Italy: Operation Husky, Operation Avalanche and Operation Shingle.

We Were Brothers is a cross-over wargame because it effectively blends elements from several game categories. From the wargame it shares historical, technical and tactical accuracy. Every wargamer, from the newbie to the expert one, will be delighted with the level of detail and all the classic elements as LOS, covers, scattering, different weapons, roles, suppressive fire, opportunity fire, off-board artillery support and Clos Air Support, etc. However, the original lean game mechanics Alea Struggle System allows does not use any table, ruler or other complicate measurement method, making the game fast, deep and easy to learn, yet challenging to master.

Between each scenario the random mission generator allows recreating your own historically accurate scenarios in order to complete your personal day-by-day race to Rome: you can generate your soldiers and squad, each one with his own skills and background, put them into battle and see how they evolve in terms of skills as they survive from mission to mission.

The miniatures inside the box and the whole game system is in 1:72 scale. In this way, any add-on to the game in terms of sceneries, vehicles, miniatures and props can be easily purchased by any model store, such as at www.wbsgames.com

Each player leads a team of four men, including one specialist, and fights against the opponent, in cooperation with other teams to form a Squad. The Combat and movement system is very lean since you don't need rulers, tables, charts as the usual wargames, yet it is very historically, technically and physically accurate to be enjoyed by hardcore wargamers. For its mechanisms, the game concentrates on suppression fire/moving and cover to cover maneuvers, simulating the real WWII tactics as well as assaulting impulse.

We Were Brothers is a game system that will be enriched by the Armoured Combat expansion and other operation theaters.

Recensioni su We Were Brothers Indice ↑

Eventi riguardanti We Were Brothers Indice ↑

Mercatino, annunci per vendere ed acquistare We Were Brothers Indice ↑

Video riguardanti We Were Brothers Indice ↑

Voti e commenti per We Were Brothers