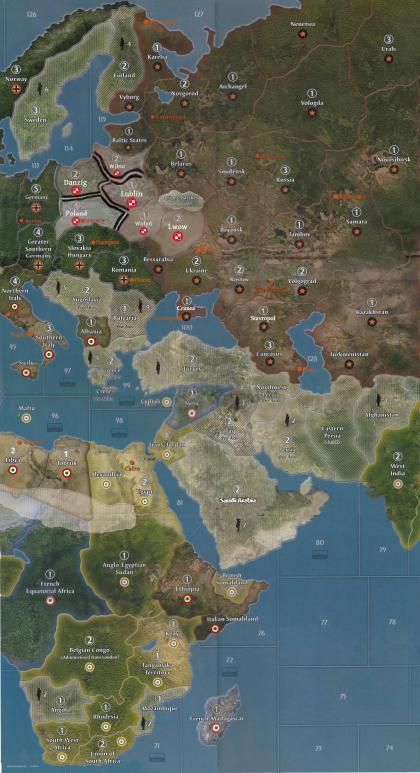 This is a total Uber Xtreme Xpansion mod for Axis & Allies Europe 1940.

Players play the game like regular Axis & Allies. The game's turns go like this. Instead of playing individual countries for individual players, my rules NOW have all the countries going together at the same time, the incomes are still separate and Japan still controls Japan's income, etc, but NOW ALL players will conduct their turns all at one time, with separate incomes for separate countries and they will all purchase their units at the same time, their turns at the same time, placed on the same "Place Units" board on the game and all playing pieces are color-coded like the regular game. Germany spends income on Germany's pieces and places them in German-held territories with industrial complexes, and Britain does the same, etc on down the line.

United States is NOT at war with anyone and therefore cannot declare war, unless and Axis player declares war on it first or after its 3rd turn for example, like in the real Global game.
The question of ownership of the Dutch territories in the game has been solved. Players will no longer need to land grab the Dutch territories in the wake of Hollland's collapse. Instead, ownership will go to the United Kingdom because they control and are patrons of the Dutch Govt in Exile in London and the Dutch Govt. In Exile is under British control, therefore they belong to the United Kingdom. They will receive the usual bonus for having posession of them. See my PDF document for additonal changes.

The goals of the game are similar to a regular Axis & Allies game. The Axis will capture London, Paris, Kiev, Moscow, and Washington. The Allies will capture the Axis capitals of Tokyo, Berlin, and Rome.

The players are France, Soviet Union, Italy, United Kingdom,(Pacific and Europe) and USA. The goals for the Axis and the Allies are the same as Europe 1940 and Global 1940. Nothing's changed there.

The Allies capture the Axis capitals of Berlin and Rome.

The rules are the same as regular Axis & Allies.

I wanted to expand upon the whole Axis & Allies game by adding more to it. This pack also adds new territories, such as Crimea. Crimea is now important for control of Sea zone 125 as it was in real life. The Black Sea Fleet is also represented with one Battleship and 1 destroyers, and 1 Transports. The Romanian fleet and Russian fleet will inhabit the same waters, but Romania will not be at war until Germany is at war with the Soviet Union because Romania and Hungary are controlled by Germany.

There also new rules regarding the setup.