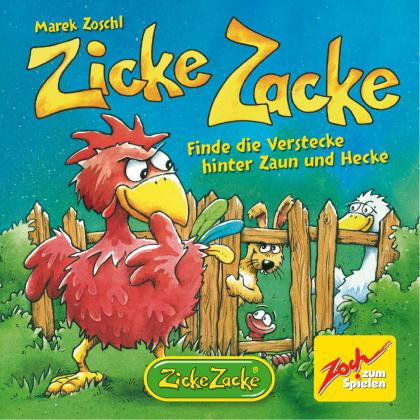 In Zicke Zacke, all the familiar Zoch critters are hiding behind a wooden fence, a fence comprised of cards, with only parts of their bodies being visible. Each player has a colored dung heap with a number of these cards next to the heap, meaning that these animals are hiding in this colored area. Several animals in hiding might also be placed next to the barn. A "slapping" card for each colored area in play, as well as the barn, is placed around a central deck of seek cards.

Each seek card shows one of the animals currently hiding. On a turn, a player reveals a seek card so that all players can see it, then everyone races to slap the correct slapping card. If you do so first, you claim the hiding card of that animal, moving it next to your dung heap. (If you own that hiding card already, you just keep it.) Slap the wrong slapping card, and you must move one hiding card to the barn, putting that animal in a new home.

If a poop card is revealed, then you're trying to find the animal revealed on the previous turn, which might now be at a new location. The player with the most hiding cards by his dung heap when the seek deck runs out wins the game.