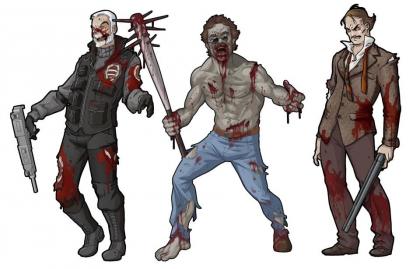 A group of three optional promotional survivors and their zombivor counterparts available to those that raise an extra amount on their pledge for the Zombicide Season Two Kickstarter campaign. Survivors include:

Don
Good old reliable Donald was until very recently an under-secretary at an obscure ministry. Pushing papers his entire career, Donald quite enjoyed his calm, ordered, life. Governments might come and go, but whoever happened to be in power always needed the civil bureaucracy.

Of course, Don noticed things were amiss instead of her usual nodding off while he gave his daily briefing, his Minister tried to have him for a light snack. Which was terribly improper and impolite, and he with some reluctance had to cave her head in with a bust of Winston Churchill.

Now the weighty responsibility of organizing a new society rests on Don's soldiers. Things have to be done properly of course, ammo requisitions, food rationing, sleeping arrangements and the like.

He does quite enjoy executing the unruly zombie constituents though.

Frank
Frank is a laid back guy that used to repossess stuff that folks didn't make their payments on. In his case, his specialty was cars, usually getting into them and driving off before the previous owners even realized what was going on.

Not usually a dangerous job, Frank still found it best to carry some protection with him on the job - his handy baseball bat has since saved him countless times. He's got a fondness for loud Hawaiian shirts, and may make small sidetrips into stores looking for fresh ones to add to his wardrobe.

Rob
After decades as an anti-intrusion expert, testing security systems the world over, Rob reluctantly retired to a life of idyll on a sunny beach. The boredom was just getting to him when the zombies appeared, exactly what he needed to make a new start. Rob doesn't feel old at all. With a gun in each hand, he'll prove it, anywhere, anytime.