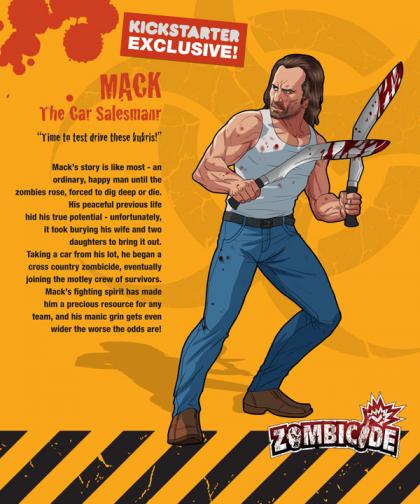 Mack's story is like most - an ordinary, happy man untill the zombies rose, forced to dig deep or die. His peacefull previous life hid his true potential - unfortunatly it took burying his wife and two daughters to bring it out. Taking a car from his lot, he began a cross country zombicide, eventually joining the motley crew of survivors. Mack's fighting spirit has made him a precious resource for any team, and his manic grin gets even wider the worse the odds are!

Mack is a promotional survivor available to those that pledge a certain level for the Zombicide Season Two Kickstarter campaign. A zombie version (Zombivor) will also be included.