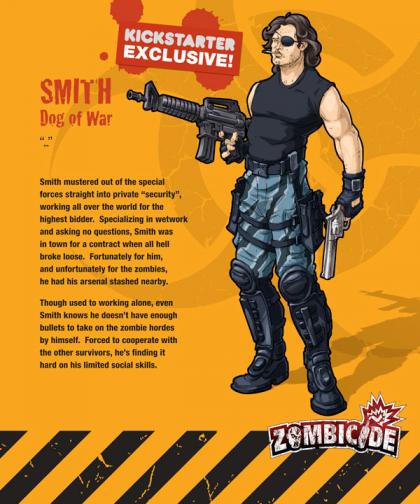 Smith mustered out of the special forces straight into private "security", working all over the world for the highest bidder. Specializing in wetwork and asking no questions, Smith was in town for a contract when all hell broke loose. Fortunatly for him, and unfortunatly for the zombies, he had his arsenal stashed nearby. Though used to working alone, even Smith knows he doesn't have enough bullets to take on the zombie hordes by himself. Forced to cooperate with the other survivors, he's finding it hard on his limited social skills.

Smith is a promotional survivor available to those that pledge a certain level for the Zombicide Season Two Kickstarter campaign. A zombie version (Zombivor) will also be included.