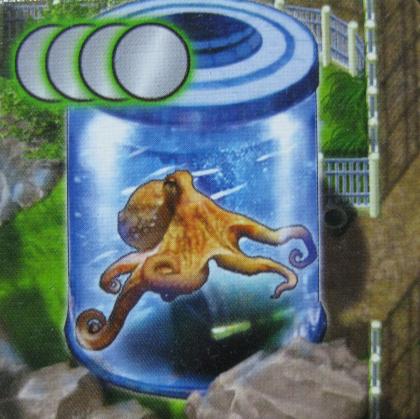 Expansion for Zooloretto or Aquaretto, given for free by Abacus at Essen 2010.

Please use the original rules with the following exceptions: the first player who fills his 6-space enclosure (Zooloretto) or places the sixth tile in one of his basins, takes the enclosure with the Octopus as a bonus* and places it below his zoo board, near his barn (Zooloretto) or near his water zoo board (Aquaretto). He immediately earns 4 coins, which he takes from the bank and must predict the player with the most points at the end of the game. If he is right, nothing happens. Otherwise he must pay back 2 coins. For each coin he cannot pay back he gets -1 point. Afterwards - as usual - the player with the most points is the winner. The Octopus enclosure remains with this player until the end of the game. The player may place no tiles in the Octopus enclosure.

*If Octopus is played with Grizzly, Polar Bear, and / or other similar expansions, the players filling their 6-space enclosures may select these enclosures in any order they want. If played with Aquaretto the player earns also a coin as usual.

(taken from the card)