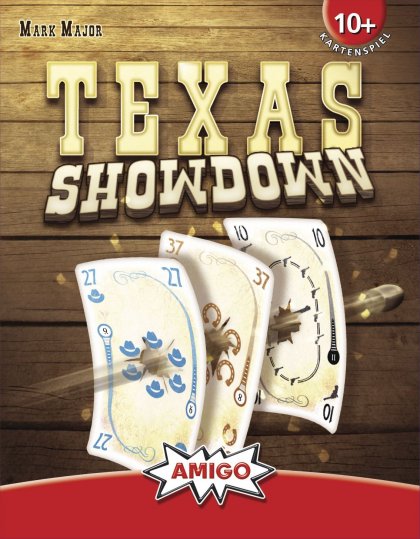 In the trick-taking game Texas Showdown, originally published as Strife, you want to avoid taking tricks as skillfully as you can, but playing off-suit might not keep you safe as the suit can change during the trick, possibly stinging you in the end.&#10;&#10;Before play, all the cards are distributed evenly among the players. Once a player leads a single card for the first trick, all other players must play a card of the same suit, if possible. If a player can't play on suit, they can play a card of any color &mdash; but after they do this, all subsequent players can play a card of either matching color (or possibly a third color if they have neither of the first two).&#10;&#10;Once all players have played to the trick, you see which color has been played most frequently in the trick. Whoever played the highest card of this color wins the trick. If two or more colors are tied, then the color with the highest sum counts as the winner.&#10;&#10;You play several rounds until someone reaches the target number of tricks taken. At that point, whoever has captured the fewest tricks wins!&#10;&#10;