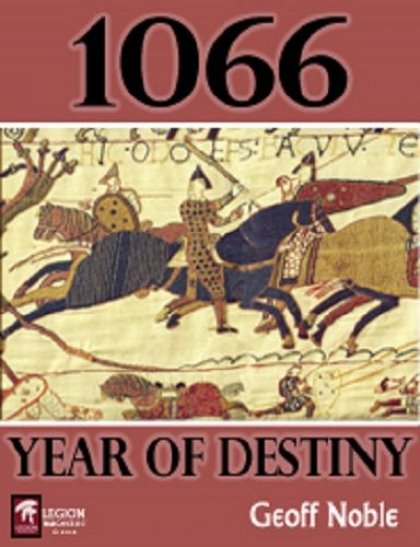 1066 is a three player game covering the various claimants to the crown of England following the death of Edward the Confessor in January 1066.&#10;&#10;The players fulfill the roles of Harald Harada, Harold Godwinson and William of Normandy. The game is split into 4 phases each of which is designed to illustrate a key component in determining who takes the crown.&#10;&#10;Firstly there is a Pre-Invasion Political Event phase (PIPE) which is designed to showcase the political intrigue that took place prior to the death of Edward. During this phase the players can gain additional support from other leaders and regions and, crucially, they can gain additionally legitimacy from various monarchs, religious bodies and events. Many events are outside their control; death of the Aethling, Scandinavian Wars and the activities of Tostig but they will also be crucial. This simple game preamble will provide an infinite variety of starting points to be played out on the map itself. In addition this phase can be a time of acquiring operational and tactical chits to use advantageously later.&#10;Legitimacy is central to the game. Unless a player gains an automatic victory then a players legitimacy level will be key in determining who has won the war. As well as during the PIPE phase it can also be changed by winning and losing battles and by taking controlling of areas on the map.&#10;&#10;However before the Operational phase there are the perils of the sea crossings. When to sail is a crucial decision by both William and Harada. Go early and the weather should be kinder, go later and you can recruit more troops. Lady luck, in the form of stormy seas can destroy the best laid plans, in addition the prevailing winds can prevent you invading, even when you are ready to go (as occurred to William). If a crossing goes badly wrong, or you lose an early decisive battle your claim lies in shreds. Don&rsquo;t despair &ndash; &lsquo;Become a Dane&rsquo;. A player can abandon their attempt, as William or Harada, and instead take up the cause of Sweyn of Denmark and try and gain the throne for the Danes (they historically invaded in 1069). It won&rsquo;t be easy winning as the Danes but it means you are still in the game.&#10;&#10;The first week in September is a dangerous time for Harold as the Fyrd stand down to collect the harvest, is this the time to strike? , will the weather conditions be in your favour.&#10;In the operational players move around the map of England to gain control of areas and improve their legitimacy as well as deciding when to strike to win a decisive battle against one of the two opponents. The operational phase is a real &lsquo;rock, paper, scissors&rsquo; problem. How to square the problems of keeping your forces concentrated to win battles, spreading them out to take control of areas whilst keeping them feed without turning areas into wastelands.&#10;&#10; When battle is joined them the action is transferred to a battle board where the individual characteristics of the differing armies is highlighted. The longer you stay on the battlefield the bigger the loss if you are defeated; often the losses from pursuit are greater than the losses from the battle itself. Winning and losing battles result in big legitimacy swings which can decide the game. &#10; Never before has this iconic campaign been gamed with all four key facets illustrated (politics, invasion, operational campaign and battles)&#10;There are a number of very good battle games but not much for the operational phase and nothing showing the political interplay or the perils of the sea crossings themselves.&#10;The victory conditions for each player differ slightly, requiring differing strategies for each side. &#10;Sweyn of Denmark is waiting in the wings. If no one &lsquo;Becomes a Dane&rsquo; then the system takes over the game system will determine if he arrives or not. Leave London inadequately protected and he will take it and without it neither William or Harold can win a decisive victory.&#10;&#10;The game is easily playable in a single session (4-5 hours)&#10;4 Kings 1 Crown &ndash; have you got what it takes to become the undisputed King of England.&#10;&#10;&mdash;description from the designer&#10;&#10;