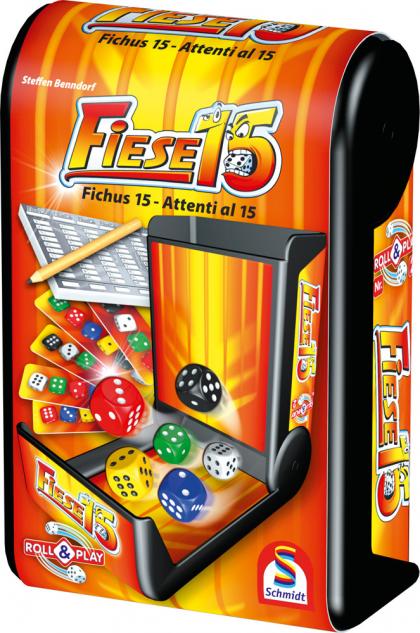 Steffen Bendorf, designer of the 2009 release Würfel Express, is back with another dicey design, this time from Schmidt Spiele as part of its new line of dice games

Each round in Fiese 15, a new target card is revealed showing six differently colored dice that sum to 15. On a turn, a player rolls all six dice, then sets aside any dice that have a value equal to or less than the similarly-colored die on the target card. For example, if the card has a blue die showing a 4, then any value from 1 to 4 on the blue die would be valid and set aside. The player can stop and score points equal to the sum of his valid dice or roll the invalid dice. If he rolls at least one valid die, he sets that aside and can choose to stop or roll again; if he rolls no valid dice, then he scores points equal to all the dice on the target card for which no die was set aside. Set aside five dice, and you score an extra five points; set aside all six, and your score for the round is doubled. Whoever has the most points after ten rounds wins the game.

Fiese 15 includes 15 target cards, with only ten being used each game. The target cards are double-sided, with only five dice showing on the opposite side, allowing players to choose a variant that handicaps the leaders with tougher targets.