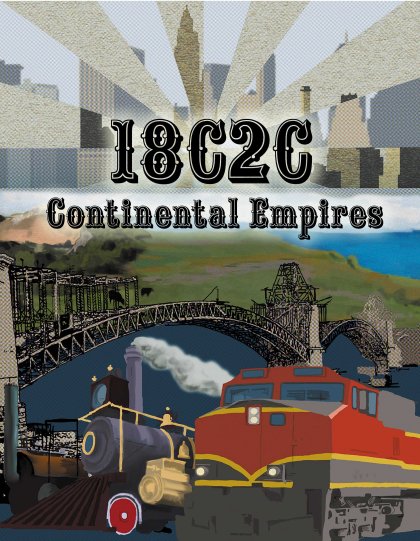 Like all members of the 18xx family, this game is played in alternating stock rounds, where players buy and sell shares in multiple corporations, and sets of operating rounds, where the corporations operate on the map and possibly pay dividends to their shareholders. At the end of the game the player with the greatest net worth in stock value and cash holdings wins.&#10;&#10;This is 18xx on a large scale - 40 railroad companies, two oversize map sheets, 825 tiles, 480 cards (stock shares, trains, private corporations), and a play time to match.&#10;&#10;This game takes the &quot;D&quot; variant of 18C2C: Manifest Destiny and reimplements it on an even larger map (the US, Canada, and Mexico) with a variety of rule changes to provide play variability and balance, most notably player-driven upgrade paths for cities (so that cities will grow to different values in different games) providing new sources of tension in the stock rounds.&#10;&#10;Game features taken from 18C2C: Manifest Destiny include a reservation auction for private companies (similar to 1830), full capitalization, company destinations (somewhat similar to the destinations in 1870: Railroading across the Trans Mississippi from 1870), corporate share redemption, and two types of mergers (voluntary mergers between pairs of companies, and two involuntary mergers of failed railroads into government railroads). High-level &quot;D&quot; trains run short routes (3 to 6 cities) and double the values, simplifying route building and calculation.&#10;&#10;Intended publication is set for 2015 as a full commercial production similar to 18OE, and possibly a conversion kit to include only those components different from 18C2C: Manifest Destiny.&#10;&#10;