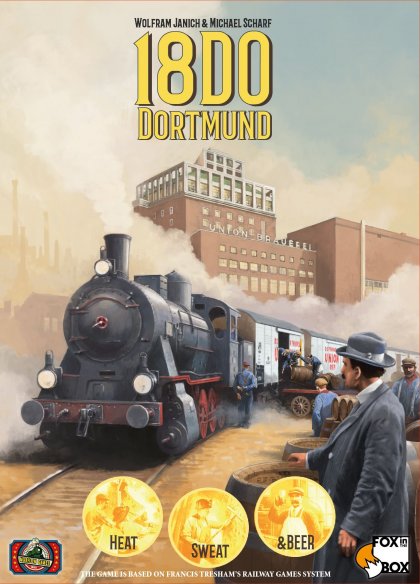 18DO-Dortmund is a strategic economy game, which reflects the development of the most important industries in Dortmund during the 19th century.&#10;Dortmund has been a town of beer brewers since the medieval age. About 1840 the first underground mining started and the first steel mill has been build. The connection with the German railway net pushed the industrial development of Dortmund furthermore. The expansion of coal mines and steel mills led to a population increase. From the latter the Dortmund breweries benefitted as the demand for beer boosted. At the end of the 19th century the Dortmund breweries used conditioned cars to transport the Dortmund Export beer by railway to distant regions.&#10;&#10;In 18DO-Dortmund the players are investors who invest in both, breweries and railway corporations. Each player starts with a private brewery. In addition every player may found a railway corporation. Coal mines and steel mills have a passive role only, but their locations have an impact on the game&rsquo;s development. All breweries are located in the hex &ldquo;Dortmund City&rdquo;. They produce and supply beer and during the course of the game they improve their brewery equipment in order to scope with the increasing requirements of the beer market which a separate element of the game. The railway corporations are more dynamic. From their starting field at the border of the map they lay tracks to the coal mines and steel mills. On this tracks they run their trains virtually and achieve income according to the value of the hexes which are part of their trains&rsquo; routes. When connecting the locations of coal mines and steel mills with the railway network the demand for beer will be increased. This reflects that the coal mines/steels mills with a railway link are able to increase their capacities and the consequently needed higher workforce will trigger an increase of beer consumption. Later in the game the breweries start shipping beer by using the transport capacity of the railway corporations. In order to do so the train of a railway corporation must run a route that leads from the &ldquo;Dortmund City&rdquo; hex to one of the read off-board destination hexes.&#10;&#10;While the railway companies start the game as corporations the brewery corporations will be founded later during the game. For this purpose private breweries may be converted into brewery corporations. In order to give an owner/director of a brewery more room for decisions there are special function tokens which will give each brewery specific advantages.&#10;&#10;When a corporation pays dividends the owner of its shares receive the due payment by the bank. In addition the stock value of these shares will be increased. At the end of games all players accumulated their possessions&rsquo; which consists of their private cash plus the value of their share portfolio. This richest player will win!&#10;&#10;Desciprion by the author&#10;&#10;