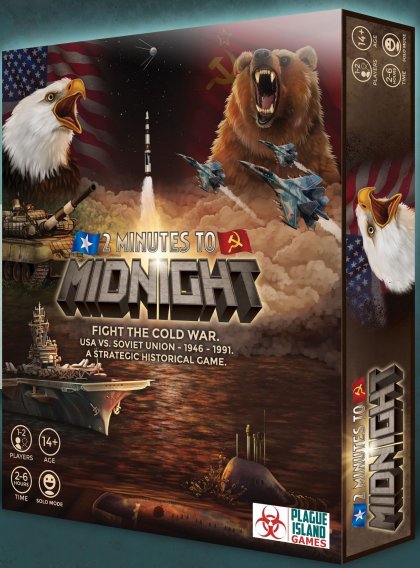 2 Minutes to Midnight is a fresh design using a chit-pull system to explore the cold war in 5-year turns starting in 1946 and running for 9 turns to 1990.&#10;&#10;The scale and depth of the game is unmatched by any other game on the market for this historical period &ndash; this is a detailed simulation of the cold war covering military, economics, politics, and trade, all in a playable package that hides the complexity and lets you focus on the strategy. A scenario runs 1-3 hours up to 6-7 hours for the full campaign game.&#10;&#10;The game is highly asymmetrical - the US has presidential elections &amp; national debt to worry about, while the Soviets must try to achieve their 5-year plan and navigate freedom (or lack thereof) within the Soviet Union itself, with the risk of the whole Communist system coming crashing down if you reform too quickly.&#10;&#10;The primary resource is money, which can be used to:&#10;&bull; Influence a country, marking it as pro-US or pro-USSR or changing its government type (Communist, Democratic or Authoritarian).&#10;&bull; Invest and create trade opportunities, improving the economy.&#10;&bull; Recruit spies&#10;&bull; Research technology&#10;&bull; Strengthen strategic forces (ICBM, SLBM, Stealth bombers)&#10;&bull; Deploy armies into civil wars or proxy wars or send arms &amp; advisors..&#10;&bull; Calm down an angry populace (and the Russians can apply the KGB for this purpose as well)&#10;&#10;The deck also contains around a dozen events per turn which, when pulled, may trigger - or may not - some of those that do not trigger go back into the deck for next turn and some are gone forever. This means that you aren't quite sure what's going to happen in each game &ndash; you can&rsquo;t load a particular country because you know something is going to happen, because there are very few fixed events. The point of the events is to add friction - you&rsquo;re never in complete control and will have to react to changing events.&#10;&#10;Technology is represented by a technology tree including nuclear weapons, the space race, armed forces, computing and industry and for the Soviets agricultural progress.&#10;&#10;Military is covered in three areas - nuclear, which prevents aggression against your nation; Conventional - which gives options to be more aggressive; Navy - boosting intelligence gathering and ability to invade from the sea, as well as hunting enemy strategic missile submarines.&#10;&#10;Spies are deployed by players to try and instigate coups or stamp them out, and for the Soviets to infiltrate and steal western technology. CIA will be busy security those secrets and keeping advanced trade items away from the Soviets.&#10;&#10;Lastly, there is an intelligence track - a high intel capability from U2 spy planes, satellites or submarines gives more ability to influence the events as they come out and react quicker than your opponent.&#10;&#10;&mdash;description from the designer&#10;&#10;