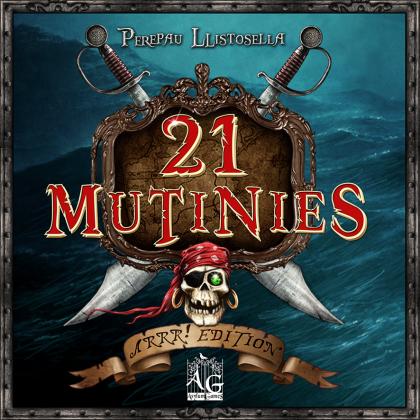 "I remember when the Caribbean was a place where any kid could become rich if he did the right thing in the right moment," said the old man sitting in the rocking chair near the door of a white hovel, paint peeling off its sides. "Oh, yes! Things were different then. Now there are no fights in the tavern of Tortuga, nor galleons that can be raided, nor rum because its trade is restricted. You couldn't loaf about in cities because you had a reward on your head and the shipwrecks weren't exhausted. Those days were different!" Suddenly the elderly man opened his eyes and leaned over in his seat. "But don't go thinking that it was an easy life! Because sailing on a pirate boat required you to sleep with a knife under the pillow or else walk the board the next day. You had to be clever to not be interfered with in a mutiny! Think about it, boy – could you do that these days?"

In 21 Mutinies Arrr! Edition, players try to earn victory points and money by taking different actions on the board. One player, the Captain, starts the round and decides which action is performed that round. The other players can either perform it along with the captain or mutiny to become the Captain for the next round. The game ends after 21 mutinies, i.e. 21 changes of the Captain role. Then the player with the most victory points wins the game. This version of 21 Mutinies includes event cards, a total adaptation to the pirate theme (with rum, treasures, shipwrecks, boardings, etc.), a new design, and games for two players.

Be the greatest pirate on the Caribbean Sea – if your sailors let you win, that is...