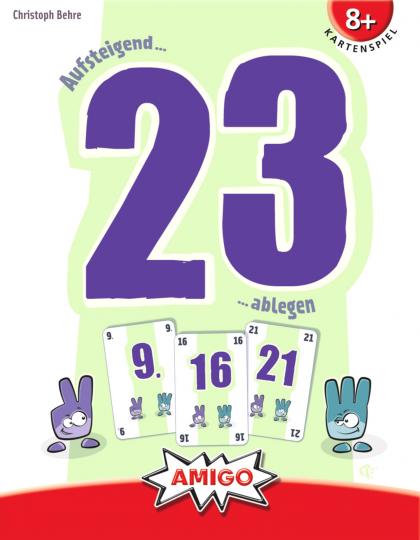 1 to 23—these are the cards that will be played in ascending order over the course of the game, but doing so is trickier than you might expect as there are limitations in doing so—not to mention opponents who will love to thwart you. In 23 whoever makes too big a jump from one number to the next must take penalty chips, and whoever collects the fewest chips after two passes through the deck wins the game.

Instead of playing cards, a player can also pass. If he does, he receives one penalty chip. Alternatively, he can pass and force the next player to play cards. In that case, he gains two penalty chips.

If a player does not want to play any more cards, he can leave the round. In that case, he receives one penalty chip for each card he has in hand.

After the second round, each player may discard two penalty chips for each bonus chip he has remaining. The player who has the fewest penalty chips wins.