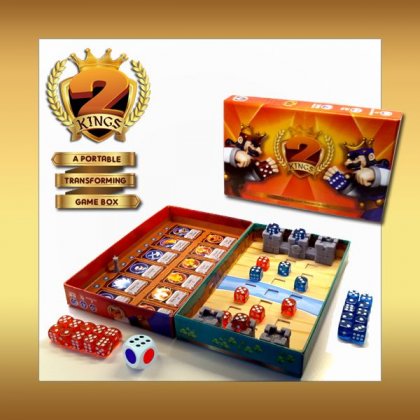 2Kings is a competitive game for two people, with an average duration of 20 minutes. Players take on the role of two kings, the red king and the blue king, with the aim of conquering the opponent's kingdom by destroying his towers.&#10;&#10;With this goal, the kings deploy and move their armies (represented by colored dice) on the battle field, trying to lead them to the opposing towers to hit them.&#10;&#10;During the fighting, the kings will also use special spells to attack the opponent, upgrade their army or perform special moves.&#10;&#10;2Kings box is a small diorama depicting a battlefield, complete with towers, rivers and meadows and was designed to be easily transportable in order to be able to easily play anywhere.&#10;&#10;With a very quick setup (20 seconds) and short and quick game rules to memorize, 2 Kings is suitable for casual and non-casual players; the game has both elements of strategy and a random component given by the roll of the dice but well balanced thanks to the use of spells.&#10;&#10;&mdash;description from the publisher&#10;&#10;