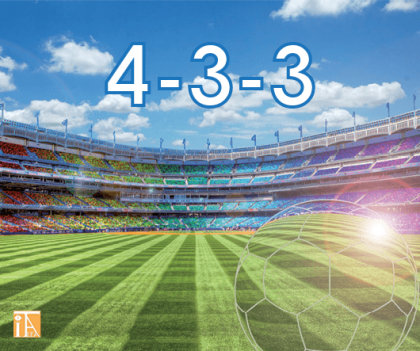 Description from the publisher:&#10;&#10;4-3-3 is a fast and game on football. Through intuitive and quick manouvres, it allows you to play a whole tournament in a few hours.&#10;In the role of the coach, the player can choose, based on their and the opponent level of strength, the tactical scheme and, through targeted replacements, he can change the fate of the game, facing injuries, red cards and penalties, and experiencing the thrill of the last terrible minutes.&#10;The brevity of each match (lasting only a few minutes) and the simplicity of the rules make 4-3-3 a particularly good game for tournaments with many players.&#10;4-3-3 is played on a game board representing a football pitch divided into three zones for each half of the field: defense, midfield and attack. Each zone can be identified by a different shade of green. On the three areas are arranged the players on the basis of the tactic chosen by the coach. Players will only occupy the zones marked of the same color of their pawn.&#10;Numbered boxes are used to indicate the sum of the scores of defense, midfield and attack: the higher the score, the stronger the zone.&#10;27 players are included to allow each player to create teams for six different levels of strength.&#10;The match is divided in eight rounds (an eventual ninth round is possible in case of pressing).&#10;Each round is divided into three phases: Substitutions and tactical changes; Initiative; Attack.&#10;During the match it&rsquo;s possible to have to face injuries and red cards.&#10;&#10;