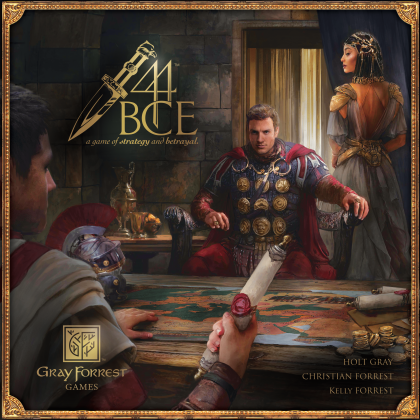 On the Ides of March 44 BCE; Julius Caesar was assassinated. In the power vacuum, you vie for control of the Roman Republic. With no clear leader in place, the Senate awards Imperium Maius to one of your rivals. You must scheme, conspire and backstab to increase your Imperium. The Senate will observe the shifts in power and grant Imperium Maius to the most powerful leader. At last, the Senate will be forced to concede, one leader has an insurmountable amount of Imperium! The Roman Empire will be born and a new Caesar will be crowned! Will it be you?&#10;&#10;44 BCE is a rotating all-on-one strategy game for 2-5 players aged 14 and up.&#10;&#10;In this dramatic, emotion provoked, immersive gameplay, you are one of five suitors, Agrippa, Brutus, Cleopatra, Mark Antony, or Octavian, competing to become the first Emperor of Rome. Each year the Imperium Maius will compete against the Suitors to maintain control of the republic.&#10;&#10;To succeed, you must collaborate with the other suitors but remain on the lookout for every opportunity to gain an advantage over your fellow competitors and slash them down. If you succeed, the Senate will declare you Imperium Maius for the next year.&#10;&#10;After clashing it out over six years (rounds), the player with the most Imperium will be anointed the first Roman Emperor!&#10;&#10;