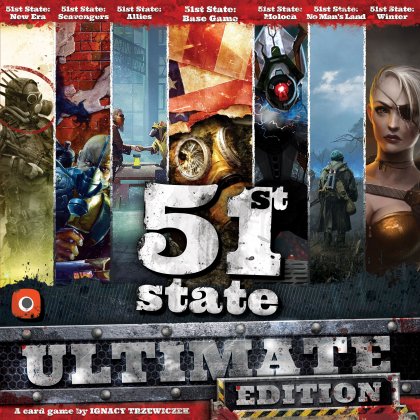 51st State: Ultimate Edition is the all-in-one package for 51st State, including the base game as well as six expansions: New Era, Winter, Scavengers, Allies, Moloch, and No Man's Land.&#10;&#10;In 51st State, the world you know no longer exists. There is no government. No army. No civilization. The United States has collapsed &mdash; and now, thirty years after the war started, new powers finally try to take control of the ruined country, try to establish a new order, try to control others and create a new country, a new state: the 51st state.&#10;&#10;In this card game, players control one of the four powers &mdash; mutants, traders, New Yorkers and Appalachians &mdash; and try to build their own new country. Players put new locations into the game, hire leaders, and send people to work in buildings to gain resources and new skills.&#10;&#10;Every card in 51st State can be put into play three ways: You can invade a location to gain many resources once, or you can sign a contract with this location to gain one resource every turn, or you can attach the location to your state so you can use its skill. One card, three possibilities. Lots of decisions and choices that matter.&#10;&#10;